The Coach of the Year Award was established in the late 1980’s and is given annually to an active, certified Special Olympics coach who has met several criteria, particularly their having made a significant and demonstrable impact on local Special Olympics Programs and their communities.  There are over 120,000 coaches within Special Olympics North America, providing instruction and competition in more than 32 sports. When you consider these numbers and the contributions of all those coaches, it truly puts the momentousness of this award in perspective. 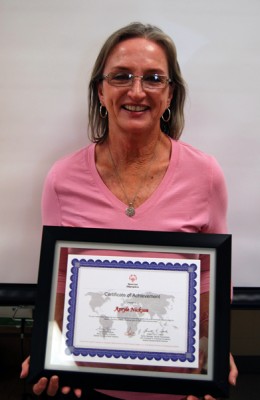 Apryle Nickson was selected in large part because of her excellence in coaching the sport of Aquatics. She has a strong background in coaching at the high school level in Florida, is a Florida High School Athletic Association certified aquatics coach, a member of the National Interscholastic Swimming Coaches Association and has taught Adapted Physical Education for over 20 years. Apryle trains her Special Olympics Aquatics athletes six months out of the year and she includes weekly home fitness programs, stretching and nutrition in her training plans and coaches Cycling to provide cross-training opportunities for her athletes.

In addition to holding monthly time trials to prepare her athletes for competition, she brings certified FINA officials to her practices to help the athletes learn the correct rules. Because of the size of her program, she has developed a Coaching Team of parents to oversee the registration process, phone tree communications, and fundraising for the team.

In addition to Aquatics and Cycling, Apryle has also coached Special Olympics Tennis. And, she has started six Young Athlete programs that include over 100 families providing them with an introduction to Special Olympics. Apryle has completed nearly every desired behavior listed in the SONA Progression of Coaching Excellence self-assessment grid and has coached at the local, state, national and World Games levels of the Movement.

The award was presented in Orlando, FL, by Dr. Kimberly Steinke of Orange County Public Schools, at a meeting of Apryle’s fellow exceptional student education and adaptive physical education colleagues. Surprised and visibly moved by the honor, Apryle said “this is so special because there are so many wonderful coaches. Wow.”

Apryle added, “I’ve spent the last 20 years supporting and promoting equality for children with disabilities, so this award is a reflection of that work…To be recognized is definitely a wonderful thing, but there are thousands of people who pledge their love and support to our amazing athletes. I am thrilled to be given the opportunity to continue to spread awareness for Special Olympics and all those involved.”

Also in attendance were Apryle’s daughter, Natalie – a Special Olympics coach herself, and Special Olympics Florida’s SVP of Programs, Nancy Sawyer. Florida has now had two SONA Coach of the Year recipients and two finalists – an impressive feat for a Program. 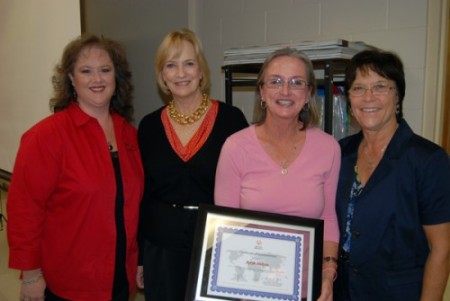 Annette K. Lynch, Senior Manager, Sports Partnerships with Emphasis on Coaching Excellence, said of Apryle “She is truly a coach’s coach, one Mrs. Shriver would claim as her own!”

“Apryle embodies Special Olympics’ commitment to providing every athlete with the quality coaching they deserve,” said Bob Gobrecht, President and Regional Managing Director, Special Olympics North America, adding “what she accomplishes through her coaching is truly exemplary – she represents the best of the best amongst hundreds of thousands of excellent volunteer coaches. Her commitment to, and deep compassion for, the athletes of Special Olympics should inspire us all to do more and reach further.”