Hello ‘World of Special Olympics’ readers, Mandy here.  I work with Ryan, Rebecca and team at Special Olympics in the communications department.  Things are busy as ever but I figured now would be a good time for my inaugural blog post as we have some great industry news to share!  (Because who doesn’t love good news on a Friday afternoon, right?!)

So what does this mean?

Well, first, you should know that SportAccord is the umbrella organization for all international sports federations.  As their President, Hein Verbruggen, says on their website “The purpose of SportAccord… is about uniting the world of sport.”

Unity. That is right up our alley!

Anyway, back in 2002, SportAccord created the Spirit of Sport awards to commend those who have made an important impact globally using sport as a tool for positive social change. Previous winners include such prominent groups as the Organizing Committee of the Beijing Olympic Games.

They issue these awards once a year at the annual SportAccord convention, which is happening this year in London, in less than two weeks.  This convention gathers the world’s top sports leaders together and at the end of the conference, on Friday April 8th, they will reveal the 2011 Spirit of Sport Award winners.

We at Special Olympics are honored to be a finalist.  This means we are one of only a handful of entries considered worthy enough to be considered by this important global group!

Can you name where they were held?  They were in the USA, Poland, Syria, China and Puerto Rico. (See some great photos from the Games below.)

These five regional Games directly impacted almost 9,000 Special Olympics’ athletes with intellectual disabilities and more than 9,000 family members from 117 countries.  In order to host these events, each Special Olympics regional office and committee had to recruit, manage and fully engage the hearts of more than 17,000 volunteers from each host country. All told, 36,000 people were directly impacted, not including spectators.  Pretty amazing, right?  We think so and we hope that SportAccord does too.

Regardless, we are proud to be named to their shortlisted nominees alongside such distinguished groups like FIBA (global basketball), FIFA (global football, a.k.a soccer) and others.

Stay tuned over the coming days as the winners are revealed in early April.  In the meantime, have a great weekend and if you want to read up on all the finalists, click here: 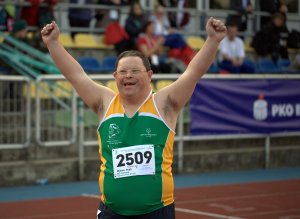 One thought on “Special Olympics Makes Shortlist For 2011 Spirit Of Sport Awards!”