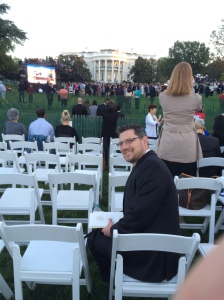 Parker Thornton felt honored and humbled to attend the official White House ceremony to welcome His Holiness Pope Francis to the United States.

The long-time Special Olympics athlete was among a crowd of about 11,000 people gathered on the South Lawn for the ceremony hosted by U.S. President Barack Obama on Wednesday, Sept. 23. Thousands more people lined the streets of Washington, D.C., for a glimpse of the third pope to ever visit the USA.

“It was a day of being in the presence of His Holiness and the President of the United States — a day I shall never forget,” said Parker. He added: “The only words to describe it all would be: absolutely breathtaking, beautiful and (I felt) extremely honored. It was wonderful to see him. It was wonderful to hear him speak.”

Parker had traveled from New Hampshire with his dad, Mark Thornton, for this once-in-a-lifetime experience. The two had a long wait before the pope arrived. Parker said he and his dad ended up chatting with a woman in the crowd near them, whose infant had been diagnosed with several health and other complications. It was a familiar story for the Thornton family.  “My parents also didn’t know what I would have, growing up,” said Parker. Now,  “I know I have an intellectual disability, but I see it as a positive.”

He’s been with Special Olympics since he was 8 years old — and plays golf, basketball, but also does downhill skiing, runs and works out at the gym. Parker has also been doing public speaking through the Athlete Leadership program for over a decade.

His goal is to change people’s attitudes about people with intellectual disabilities (ID). He says Special Olympics sports does that — and more. “Special Olympics shows that people with ID can do lots of things. My friends with ID do a lot that other people can’t — including people who are in society’s ‘norm’. I’ll tell you something else: people in the ‘norm’ of society take a lot for granted.”

Parker will be heading back to New Hampshire soon — and to his job at Healthy at Home, a non-profit that helps older people stay in their homes. He said it was an amazing visit to Washington, even though he didn’t get to see Pope Francis up close.

And if he had gotten the chance to speak to the Pope. one-on-one? “Well, then I would have practiced very hard. Then I would have said, ‘Your Holiness, I’m a Special Olympics athlete and I am here for all the Special Olympics athletes in my state of New Hampshire and all the athletes from around the world. I hope you can bless us and help our movement so we can continue our work all around the world’.”