Editor’s Note: The following is a guest blog post from Astrid Moritz, the mother of a Special Olympics athlete. 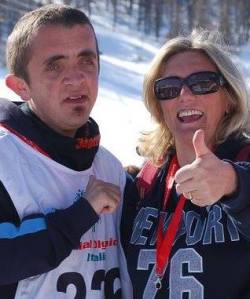 I’m Astrid Moritz, Sebastian Palmeri’s mother and I feel like a rock star’s mother. My son is born a real winner and this has only happened since we joined Special Olympics. Before he was just the disabled son of a German woman – now he is the guy who wins a lot of medals. He is the one whose photo can be seen in newspapers. Now people are saying “I saw him on TV”…” Look, that’s Sebastian”… “I know him!”…

This is our story.

When Sebastian finished high school, during which we were assisted by psychologists, neuro-psychiatrists and public health carers, we found ourselves alone and isolated after graduation. As his parents we were now the only people responsible for Sebastian. I had to organize his life, he was a young man of 20 and wanting to live his life like any other young person but the doors of the places for entertainment and sports were closed to him…he was too old…he was too young… too slow…too different…no one wanted him. One day I read a short advertisement in the newspaper il Messaggero: “Rowing for people with intellectual disabilities with Special Olympics!” I thought rowing on the river? Special Olympics? I don’t know what this is.

I called the phone number and made an appointment. We were welcomed with an open smile by Paolo Ramoni, Special Olympics National technical coordinator for rowing. Later I learned that all of the people involved in Special Olympics have that kind of smile…it must be an uncontrolled virus! That day changed our lives.

Our adventure with Special Olympics began that way and since then we can’t heal from this. Special Olympics must be lived to understand what I mean. I think that a person with an intellectual disability loses the opportunity to have positive emotions if they don’t take part in a Special Olympics event even once in life. Special Olympics makes you discover a part of your brain that you did not know existed. This movement makes you feel joy and pure serenity in your soul, you are not alone anymore and this is true for the athletes, their parents, coaches and volunteers who, each one, in his own way, join in the great smile that only Special Olympics can give.

Since that first day at Special Olympics we have been living an involving experience. No more running after “normality”. No more trying to keep up with it. No more living isolated and in solitude. My son is no longer the “disabled” training in sports. Sebastian now is an athlete! Now he is part of a team of athletes, coaches and volunteers. To hear him shout slogans of support for his team “Tevere Remo” is pure joy. Watching him as he takes the bus to leave alone for an away game, hearing him say ”I’m afraid” but when I tell him that he can stay at home and not compete he says “but I want to compete. I want to be part of my team. I want to win. I want to make my coach proud of me. I want you to be proud of me but I’m afraid!” That is pure joy and it is fantastic. His awareness of being in competition with himself and his commitment during the competitions is pure joy. My son was never invited to birthday parties and without any social life. Now, in Special Olympics, he is an athlete and he is respected for this. He is valued as an athlete, always celebrated as a champion without caring of scores or results. Sebastian is an athlete just like Massi Rosolino (Italian Olympic Swimmer). There’s not much difference. Rosolino is just a bit stronger than Sebastian but, giving it a second thought, they are at the same level as both give their maximum in training and competitions.

In Viterbo, during the Special Olympics National Summer Games 2013, we lived a 5-day dream and not only for the sport but also because the town gave us all such a magical experience that makes Special Olympics so special. There was lots of emotion, competitions, parades, night parties in town squares. All so beautiful.

I’d like to end our story by quoting Sebastian’s words “Mommy, what a warm feeling I felt on the podium! When do we go back to Viterbo?”

7 thoughts on “My Son is a Rock Star”