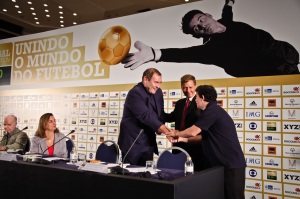 Soccerex is the global leader for the business of football. For 15 years, through 25 events, across 5 continents, Soccerex has brought together senior decision-makers from industries interested in football to learn, network and do business. Through this partnership, Soccerex will use its different properties and media channels to promote the cause of Special Olympics and raise awareness of their different projects around the world.

During 2011-2014, Soccerex will host its main event, the Soccerex Global Convention, in Rio de Janeiro, Brazil. During that time it will also host the Soccerex European Forum in Manchester and look to host other events in key territories such as Asia and Africa. Special Olympics will be able to participate in all of these events.

At this year’s Soccerex Global Convention, which is taking place on the 26th – 30th of November, Special Olympics will host a Unity Football match during the Football Festival on Copacabana Beach and will participate in the conference panel called “Beyond the Final Whistle: Football’s Social Legacy”. Global Football Ambassadors Cafu, Romario, Zico and Denilson will be attending to help raise awareness about Special Olympics. The Congress is expected to bring together more than 4,000 football professionals: current football players and legends, football clubs, football federation representatives, government officials, corporate partners and international sports media.