Earlier this week, Special Olympics celebrated the spirit of Olympism as Chairman and CEO, Tim Shriver, travelled to Lausanne, Switzerland to meet with the President of the International Olympic Committee (IOC), Mr. Jacques Rogge.

It was nearly 25 years ago when the IOC first recognized Special Olympics with a Protocol of Agreement during the 1988 Winter Olympics.  This week, the spirit of Olympism continued as these leaders met to discuss how they can work together to improve the world through the power of sport.

The IOC acknowledged the role and importance of Special Olympics for the Olympic movement worldwide and used the meeting to talk about how together we can all use sport to build a better world.

Jacques Rogge congratulated Special Olympics on the successful organization of the recent 2011 Special Olympics World Summer Games held in Athens, Greece and proudly supported that all athletes of Special Olympics are winners.  The IOC also acknowledged the importance of what Special Olympics is capable of off the playing field, providing impact in areas such as health, education, social inclusion.

Special Olympics uses sports training and competition for people with intellectual disabilities as a catalyst for social change and a way of creating more unified communities around the world where each person, regardless of ability or disability, is accepted and welcomed, and where every individual contributes to the strength and vibrancy of society as a whole.

Special Olympics is proud to be a member of the Olympic movement and to be recognized by the IOC.

Special Olympics and the International Olympic Committee will continue to work together to put the spirit of Olympism in action across the world to demonstrate the continued power of sports as an agent for great social change. 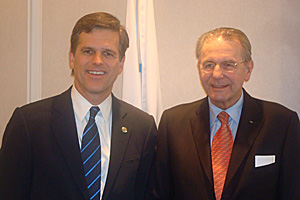 Tim Shriver and IOC President Jacques Rogge met this week to discuss how on-going collaboration can help improve the world through the power of sport.

3 thoughts on “Olympism In Action”