Below is a personal account from the First Lady of Poland, Mrs Anna Komorowska on her visit to Athens 2011. 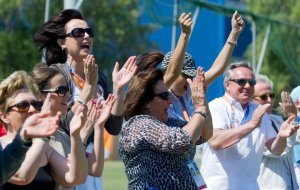 Hosting Special Olympics Games are as much about the legacy they leave behind than the joy, pride and fun we all experience during these two weeks.

Almost one year ago my husband, The President of Poland, Mr Bronislaw Komorowski and I were honoured to host the 2010 Special Olympics European Summer Games in Warsaw.

It was a wonderful experience I will never forget. Our country hosted 1,600 athletes and 600 coaches from 56 countries across Europe and Central Asia. The 2,500 volunteers who supported the Games have since received a President’s Award in recognition of their tireless and selfish efforts on behalf of the athletes.

I am personally committed to ensure that the legacy of these Games will continue: that we will never reverse the shift in attitudes towards people with intellectual disabilities and that we will continue to create communities of respect, acceptance and inclusion.

It was my great pleasure and honour to travel to Athens to support the Polish delegation, 83 athletes and 27 delegate members, in the 2011 Special Olympics World Summer Games.

The highlight of my trip was certainly cheering the athletes on in competitions including tennis, athletics, football, powerlifting, basketball and cycling and of course awarding a medal to Jacek Ciesluk in the 1,000 meters cycling.

I was so proud to lead the Polish Team in the Parade of Athletes during the Opening Ceremony alongside Mrs Katarzyna Frank-Niemczycka, President of SO Poland and Mrs Jolanta Kwasniewska, the former First Lady of Poland.

I am so inspired to see them so motivated to compete and win. My husband, President Komorowski and I are committed to continuing the good work that was achieved in Poland last year. Our hope is that one day Poland may be able to demonstrate this commitment even stronger by inviting the entire world-wide Special Olympics community to our beautiful country.

I would like to commend the Government of Greece and the Games Organising Committee led by Joanna Despotopoulou, for fulfilling their promise to Special Olympics and the athletes during this difficult time, and hosting everyone in such an efficient manner.

It was also my great pleasure during my time in Athens to honour the legacy of the founder of Special Olympics by attending the dedication of a park in Athens to Eunice Kennedy Shriver that will encourage an inclusive play and healthy living environment for future generations.

Having met with volunteers, athletes, coaches, and youth leaders from around the world, I am so moved by how the global movement is so dedicated to the dream of the late Mrs Shriver of a world where people with intellectual disabilities have the same opportunities as everyone to reach their full potential in sport.

I am delighted to invite Team Poland to a ‘Welcome Home’ reception at our beautiful Presidential Palace in Warsaw. I am so looking forward to seeing my friends again, to congratulating them and recognizing their commitment to represent Poland so proudly during the 2011 World Summer Games.

Congratulations to all the athletes participating in Athens 2011!