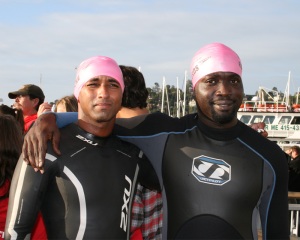 Are you competing at the Games? No, I’m working with the team that is facilitating open water swimming and I’m helping to facilitate the Healthy Athletes venue with other International Global Messengers.

How have you been involved with Special Olympics?
I started swimming in Special Olympics when I was 9.  Since then, I’ve competed in football (soccer), basketball, volleyball and floor hockey. I competed in my first World Games in South Bend, Indiana in 1987 where I represented Trinidad and Tobago in swimming.    In 1995, I officiated Aquatics at the Special Olympics World Summer Games in Connecticut.  Then in 1997, I was appointed to the Special Olympics Board of Directors and served on the Rules committee.  I was also a part of the first class of Special Olympics Global Messengers from 1998 to 2000. For the past ten years, I’ve been an employee of Special Olympics International, where I coordinate Leadership Development and Education as well as the Regional Growth Division and the Sport department.

When was your first open water swim?
Swimming has always been my favorite sport. In the early 1990s, I was training with three Special Olympics aquatics athletes in Trinidad and we wanted to increase our endurance training and competition.  We heard about a local four-mile open water swim called the “Ovaltine Open Water Swim” and asked our coach if we could sign up.  At first, the race officials were nervous about allowing us to compete, so they required us to do a swimming demonstration.  So we did and that was it. They felt confident that we could finish the race.

Why did you advocate for open water swimming at the 2011 World Games?
The International Olympic Committee introduced the 10K open water swim at the 2008 Olympic Games in Beijing. It has always been important to me that Special Olympics mirror the Olympic Games, since we share their name.   And since swimming has always been a passion of mine, I wanted it to be included in 2011.

What do you know about the open water swimmers who will be competing in Athens?
For the past six years, I have competed in the RCP Tiburon Mile Open Water Swim near San Francisco, California with a group of Special Olympics athletes.  During this time, athletes from Ireland, Israel, China, Hong Kong, Latin America, and California have competed in the event.  We needed 30 athletes to compete in order for the Games Organizing Committee to approve it.  Right now, we have 41 athletes currently registered for Athens.

What advice do you have for them?
Don’t forget your swim cap! But seriously, I always think about how Mrs. Shriver was a swimmer.  When she started the Games in 1968, we had one 25 meter event.  Now we have a one-mile event and that is a testimony of how far our movement has come.

2 thoughts on “Spotlight on Kester Edwards”